August 16, 2013
Note: I included images of famous nude artwork later in this post.  Nothing to be embarrassed by, but if you prefer avoiding nude images, skip this post :)

When you have a daughter, you find yourself suddenly plunged into the world of Discussing How to Raise Daughters.  This is complicated business fraught with nuanced emotional complexities derived from history, social norms, and, probably, fairy dust and unicorn farts.  Also, the fact that your daughter isn't even a year old yet makes a lot of this more theoretical than practical in nature.

Body image is a big thing that gets tossed around, and though the issues surrounding body image can be just as difficult for men as women, we really emphasize then when talking about raising daughters.  Which is how I end up paying attention to stories and articles like this one: http://www.huffingtonpost.com/sarah-koppelkam/body-image_b_3678534.html?ncid=edlinkusaolp00000009

The gist?  Don't talk about bodies with daughters except from the perspective of their wonderful functionality.  Not "You've lost weight!" or "You look great!" but "Look how strong you are!"

At first I wanted to love this advice.

Here's the thing.  Bodies are more than functional.  They are expressive, beautiful, sometimes complicated.  And though I can wax poetic about this from a non-writing perspective, as a writer, the idea of reducing bodies to their mere functions unnerves me.

Because my character who is a dancer uses her body to express herself whether she means it or not.  A teenage athlete might think about himself in terms of what his body accomplishes in relation to what his teammates' can, how the muscle under the skin isn't just functional but expresses who he is.  My historical characters have taught me that body as form is a reflection on fashion and societal mores.  And let's be honest--when the 16 year old who still lives in me tries on a dress, she's worried she's going to look like a pudding pop and hoping to feel like Cinderella, not considering how that dress is going to help her body function.

Bodies aren't just function--they're form.  And I like it that way.  I think that Waterhouses' lithe lily maids are beautiful.  I also think that Rubens' porcelain and rose nudes are gorgeous.   We spent a lot of time working ourselves away from unhealthy views of The Body as Vulgar, and I don't think it's beneficial to start thinking of The Body as Function is a replacement. 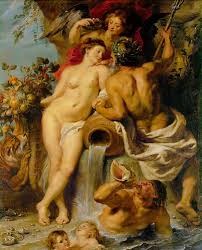 Let me be clear--I'm not about fat-shaming in literature, especially in YA, but I don't think that paying attention to the many ways bodies can be beautiful is a bad thing.  The problem, as I see it, in discussing body image isn't in discussing how bodies can be beautiful, but in picking one body type to elevate and thereby degrade all the others.  Pretending bodies can't be attractive, alluring, expressive, or artistic sweeps the issue under the rug without really addressing it.

Among all the eighteenth-century peddlers working the city streets, broadsheet sellers were among the poorest.  Some saw selling broadsheets, including those printed with ballad lyrics, as basically one step up from begging; artwork depicts these salespeople as impoverished, wearing ragged clothing.  At the same time, they provided a vital service in terms of disseminating popular culture at a time when your new material came in print--not records, films, radio, or the we…
Post a Comment
Read more