Among all the eighteenth-century peddlers working the city streets, broadsheet sellers were among the poorest.  Some saw selling broadsheets, including those printed with ballad lyrics, as basically one step up from begging; artwork depicts these salespeople as impoverished, wearing ragged clothing.  At the same time, they provided a vital service in terms of disseminating popular culture at a time when your new material came in print--not records, films, radio, or the web. 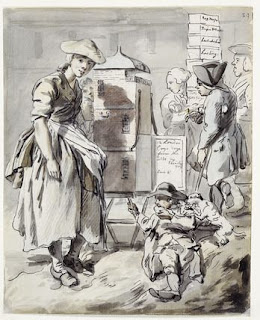 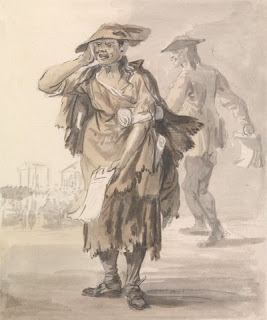 Last Dying Speech and Confession, Paul Sandby, 1759 (Likely a pulpy, pop culture piece, possibly a dragdown of a famous figure or a segment of a longer work)

And if you want to access new music in a world with no recording devices, no radio, no mp3 files...how do you do that? 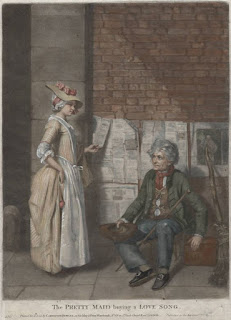 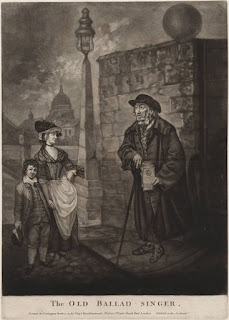 The lyrics, of course, can be printed on broadsheets, but the melody is less commonly found printed on surviving examples (occasionally you do see some printed music, too).  The ballad seller would then sing the song, both enticing customers to come over to BUY THE THING and teaching the melody for repeating later. Melodies often repeat, too--the same one might be used for many different songs.  The ballads themselves were often very long, providing hours of entertainment from a few pieces of music.  (Hey, they didn't have smartphones, how else do you pass the time while you're doing laundry or waiting on potatoes to boil?)

And what does this tell us about literacy? Despite commonly quoted "facts" that few people could read in the eighteenth century, a thriving market for cheap print goods tells us that many people did have a comfortable enough ability to read.  They purchased and enjoyed these sheets.  In fact, the lack of printed music--staff and notes--perhaps confirms this: People were literate but not musically literate.

And the ballad seller's poorly compensated service meant that people could learn and sing new music. 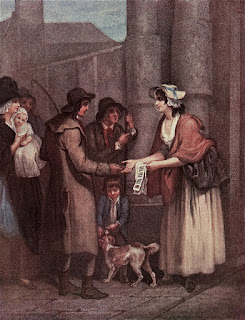 A New Love Song, only Ha'pence a Piece, Francis Wheatley