April 10, 2018
One of the places I found inspiration for Galitha City was in the artwork depicting eighteenth century London.  The "Cries of London" are actually a catchall for quite a few series of prints, one of the more famous of which is by Francis Wheatley.  Wheatley may have idealized his subjects a little bit; comparing his work to, say, Paul Sandby's sketches, his criers tend to look better-kempt, less dirty, and significantly less likely to steal something. 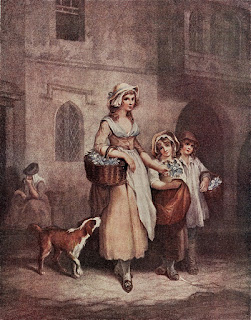 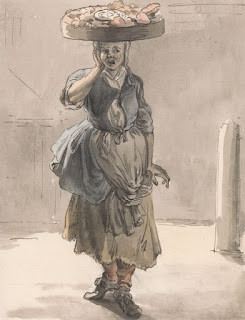 From the Yale Center for British Art

It may be little surprise that I prefer Sandby for historical research purposes...if he depicts someone with a certain cap or their apron tied in a knot (y'all are seeing that, too, right?) it's pretty sure that's because someone *actually did that.*

Still, Wheatley's work also gives insight into a busy, bustling, *loud* city life in eighteenth century England, even if his cabbage sellers and matchstick girls are all a little too rosy-cheeked and cheerful.  There is the texture of life here--what people are wearing how they wear it, what they carry and what they use. 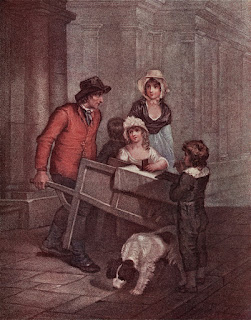 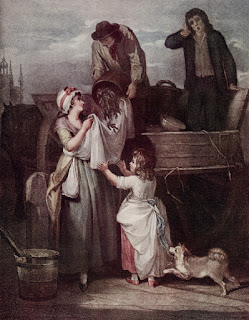 Fresh Gathered Peas, Young Hastings
{Stuff I see: Aprons used to carry goods, I think that's a pocket revealed by the uplifted apron, a child helping mom, a small dog that I *think might be* the "Spitz" breed very popular in the eighteenth century and later renamed "American Eskimo" in the US due to anti-German sentiment in WWI but don't quote me on that} 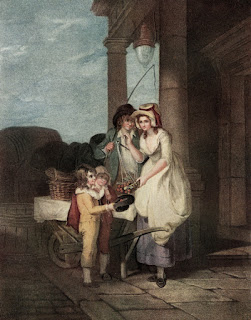 Round & Sound, Five Pence a Pound, Duke Cherries
{Stuff I see: A young gentleman in a wee suit, a wheelbarrow for toting fruit, cherries measured by weight, a fellow without a waistcoat under his coat--it must be a hot day!} 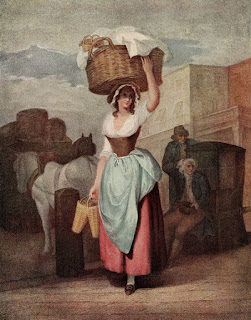 Strawberrys, Scarlet Strawberrys
{Stuff I see: A tucked up apron, a woman wearing stays--corset--but no gown or jacket, those curious little baskets called "pottles" used for portioning out strawberries.  You by them not by the pound, but by the pottle!}

Wheatley named each work after the "cry" a street seller might use to entice customers.  Taken en masse, we could envision a very loud street scene with competing voices vying for attention.  This is the bedrock of good marketing--a product, a slogan, placement where the customer can reach it!  Beyond this vitality that inspired a lively city in my writing, I love that these images touch on the less commonly depicted people. These folks were poor.  They were scraping by, often selling seasonal items.  Many of them are women; many of these women have children tagging along, assisting Mum with sales, portioning out vegetables, toting baskets.  That's what I see in these images--LIFE lived by people who are usually silenced by the passing of time, which often only records the work and deeds of the Big Important People.  It was important to me to craft a city full of life being lived by ordinary people

Among all the eighteenth-century peddlers working the city streets, broadsheet sellers were among the poorest.  Some saw selling broadsheets, including those printed with ballad lyrics, as basically one step up from begging; artwork depicts these salespeople as impoverished, wearing ragged clothing.  At the same time, they provided a vital service in terms of disseminating popular culture at a time when your new material came in print--not records, films, radio, or the we…
Post a Comment
Read more